At a time when the iPod speaker dock is so ubiquitous, it’s getting hard to find manufacturers dedicated to designing high-quality audio systems for PC use. Therefore, it's reinvigorating to see an industry bigwig such as Logitech step up to the play and craft one of the best performing 2.1 channel PC audio systems.

Just above the $100 mark, the Z623 doesn’t necessarily come across as a bargain. But it makes up for its hefty price with an outstanding audio output and punching power. As much as movie buffs are lovestruck by the THX certification, the speaker is equally suited for playing music. The thunderous subwoofer can be cracked up for an outdoor party and dialed down for a more refined output.

So, what else does the Logitech Z623 offer?

Being an audio system designed for gaming and watching movies, you would expect the Z623 to have the looks of most speakers in its genre. A typical gaming speaker has extra design elements, curves, and rough edges. Interestingly, the Z623 has none of those traits. It looks more of a powerhouse that you would find in a music studio.

The stereo speakers have dimensions of 7.8” x 5.6” x 5.4” and positioned upright for better desktop usage. On the front panel of the system’s right speaker are three knobs – for adjusting the volume, power, and bass – that are conveniently positioned below the 2.5-inch driver. The positioning of the bass knob is unique since most similar systems have them placed on the rear end of the sub.

The right panel houses a headphone jack an Aux input. A large cable for connecting the speaker to the subwoofer extends from the back. The left speaker is linked to the sub by an RCA connection.

The cables are non-removable, and this presents the first shortcoming to an otherwise perfect design. In most music systems, the cables are normally the first item to get damaged. If this happens on the Z623, you will be required to buy a whole new set or pay for an unnecessary repair.

The sub is quite huge, measuring 11.9” x 11.1” x 10.4”. In addition to the said connections on the system’s rear panel, the sub also hosts a 3.5mm auxiliary input as well as a stereo RCA input for connecting to the PC.

The Z623 doesn’t come with a remote control despite being an absolute powerhouse. So if you use this beast for a party or video games, you’ll certainly miss the convenience of adjusting the bass and volume remotely. 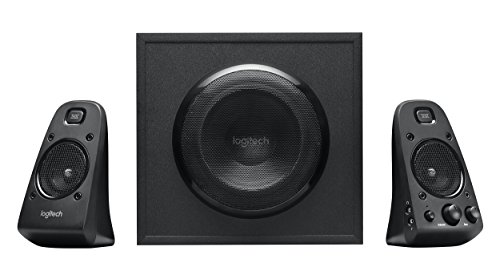 There’s no doubt that the Z623 is an outstanding performer. The twin satellite speakers deliver crystal clear high notes with incredibly detailed midranges, while the sub cranks out a deep bass that’s powerful enough to rattle everything in your room.

The wattage of this system is simply exceptional. Each of the twin speakers pumps out 35 watts of distortion-free output, while the sub puts out 130 watts of low-frequency sound. With a total wattage of 200, the Z623 will certainly electrify your party with its incredible sound.

Even better, is that you can set the system into “loud” mode by adjusting the bass to maximum. In this mode, the mids will still retain their impeccable detail, and the bass response will hit twice as hard.

And what about the THX certification? What does it mean for the 2.1 system’s movie performance?

You must understand that it’s almost impossible to replicate the exact sound of a THX theatre with just one subwoofer and two satellites. In the case of the Z623, Logitech elusively interpreted the THX certification to mean that the system meets high performance, reliability, and quality standards.

That said, the THX hype is very real. The manufacturers have utilized THX standards to modify the speaker's output, much to the delight of movie and game enthusiasts. Watching a movie on the Z623 is the closest you can get to the immersive experience of multi-channel theatre systems. Gunshots and shattering sound more real and conversations are clearer than what you would get with an ordinary 2.1 audio system.

There are many reasons to purchase Logitech Z623, but you might be wondering how its audio and design compares to some other speakers on the market. For example, Creative Gigaworks T40 is another popular home theatre speaker that has many impressive qualities to it, but how does Logitech Z623 stand next to this popular unit?

Creative Gigaworks T40 has an impressive bass for its size and built. As a result, this speaker is best suited for a medium-sized room such as a living room or bedroom, and the audio performs best indoors as ambiance noise can absorb some of the audio. Creative Gigaworks T40 has an outstanding volume for its size, too, and you can turn it to the maximum level without any issues with distortion. Compared to Logitech Z623, these speakers aren’t as powerful and the bass doesn’t have as much of a punch. But, it’s ideal to enhance your computer’s sound or even use with portable devices including an iPod or even your smartphone. With that being said, Creative Gigaworks T40 isn’t light enough to carry around with you, so you’ll definitely need an allocated space to store it.

Creative Gigaworks T40 produces a fairly full sound with a great balance of frequencies that make it ideal for listening to music and watching movies. However, this home theatre speaker doesn’t direct the sound waves in all directions like Logitech Z623 does, meaning the sound doesn’t carry as far. Also, the low frequencies on Creative Gigaworks T40 aren’t as noticeable, making the bass less transparent so hip-hop lovers have to enjoy minimal bass. On the positive side, there is excellent clarity to instrumentals.

Controversy, Logitech Z623 has an excellent surround sound and produces thumps toward low-end frequencies. Also, if you like to move around the room while you’re listening to music, you’ll appreciate how the sound follows you - even more so if you use it in a small room. This speaker’s best quality is reaching an upper range of music as the notes remain crisp and transparent. However, Creative Gigaworks T40 wins the battle of protection as this model can separate between middle and high frequencies effortlessly.

Creative Gigaworks T40 automatically turns off after a set amount of time if the speakers aren’t being used. This is a great way to save the battery and ensure that the speakers aren’t being overused. Once the speakers detect sound, they’ll automatically switch back on after three seconds. Featuring a power adapter, this is fairly large but you can hide it behind your set-up if you’d prefer. Spend some quality time doing this to prevent any hums and vibrations that could disrupt your audio.

Logitech Z623 is an ideal size and shape for standing next to your desktop without having to adjust the position each time you use the speakers. If you’d like to add more power, you can purchase booster packs to further enhance the sound and make these speakers ideal for more than just listening to people talking or watching videos and have a mini party in your office.

Another popular laptop speaker is Klipsch ProMedia 2.1. Let’s take a look at some of the ways these speakers differentiate between one another.

Klipsch ProMedia 2.1 is a larger speaker than Logitech Z623, although this bigger design also means incredible power and a wide volume range. Consequently, you can fill a large room with a rich sound and deep bass that’ll have everyone tapping their toes. However, this doesn’t mean it’s so powerful that the unit can outdo a bookshelf speaker, for example, it’s just given that the size is small and the weight is light.

On the other hand, Logitech Z623 exudes a punchy bass for a speaker of this size and design, and the subwoofer is large to fill a medium-sized room.

Klipsch ProMedia produces nice low frequencies that is great for watching movies and making you feel as though you’re in the room with the action. By offering impressive lows and mid-range frequencies, this speaker has an excellent sound and design quality for its price range and size. To further enhance the high frequencies, this speaker is filled with micro horns throughout its design that tend to be more accurate and powerful than cheap tweeters in most speakers of this size.

Klipsch ProMedia doesn’t produce a really loud volume toward the lower middle frequencies, but when the notes hit the low frequencies, the subwoofer kicks in to enhance the power.

Klipsch ProMedia powers on quickly and there are only a couple of seconds loading time for the speaker to connect to your chosen device. These speakers take some powering to fully charge, but once you’re ready to use them, they can rattle decorations on your work surface. This is also down to their weight as the speakers are bulkier than Logitech Z623.

This Logitech Z623 review has focused on this speaker’s features, but what are some important factors to bear in mind when purchasing laptop speakers? Below, we’ve outlined the most essential characteristics to consider throughout your search.

Sometimes it’s important that you can easily move your speakers around with you - especially if you tend to travel with your laptop. This could be among the rooms in your house, or even across different countries, or perhaps you like to regularly adjust your work set-up in your office. Sometimes, it’s important that your speakers are small and light enough to take with you on the go, but this isn’t an essential feature for everyone. You should consider that a smaller speaker means less power, so think about what’s most important to you: audio performance or design?

What You’ll Use The Speakers For

To make the best choice for you, it’s important that you have a solid idea of what you’ll use the PC speakers for. Is it to listen to music? Watch movies? Play games? You might not have considered how important the activity is, but it certainly is to make sure you have the best surround system for you. If you intend on using your speaker for multiple uses, choose a PC speaker that is versatile enough to cover all bases.

Another factor to consider is how functional the speakers are. Specifically, are you searching for a device that can play music from your tablet, television, and smartphone as well as laptop? Or are you happy enough for only one use? Another option to consider is if the speaker is compatible with your laptop. For example, not all speakers can work with Windows and Apple products. Plus, do you like to regularly update your laptop? If so, does this mean also updating your speaker often?

All the features listed in this Logitech Z623 Review makes its price tag look quite cheap. Its sound is robust, deep, and the most 3D output you will ever get with a 2.1 audio system. Considering it achieves all this from a computer’s low-quality built-in soundcard, the Z623 has lived up to the hype.

If you can overlook the cable connection and the lack of a remote control system, this is a great buy. Enjoy!

The Foxl Dash gets our top marks! Click here to get the best price!

Our pick for the best loudest portable category is the Foxl-v2 Foxlo Duet System.

For the Large Portable category, the Big Jam Box wins for superior design and sound! Click here to see the different color options and prices..

Some Of Our Favorites: